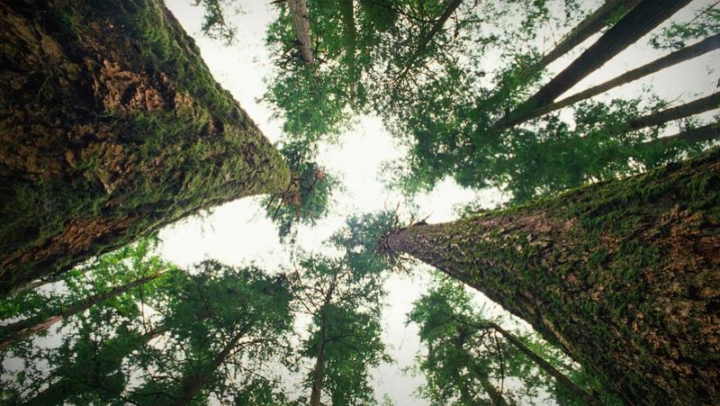 Years ago, the Canadian forest ecologist Suzanne Simard was ecstatic when she used her Geiger counter by the needles of fir and detected sounds. After exposing a neighbouring birch tree to radiolabelled carbon dioxide, that CO2 was converted into glucose which was also radiolabelled. This nutrient had found its way into the spruce tree.

“It was the sound of Birch talking to fir. Birch was saying, ‘hey, can I help you?’ And the fir said, ‘yeah, can you send me some of your carbon ’cause somebody threw a shade cloth over me.’, explained Simard.

During her TED talk, Suzanne Simard says: ” Underground, there is this other world. A world of infinite biological pathways that connect trees and allow them to communicate and allow the forest to behave as though it’s a single organism. It might remind you of a sort of intelligence.”

S. Simard discovered that trees ‘converse’ with each other via extensive networks of fungal threads or mycelia, exchanging nutrients and water. “Mycelium infects and colonizes the roots of all the trees and plants, and where the fungal cells interact with the root cells, there’s a trade of carbon for nutrients. That fungus gets those nutrients by growing through the soil and coating every soil particle. The web is so dense that there can be hundreds of kilometres of mycelium under a single footstep.”

Some trees communicate aboveground. Arthur De Haeck of the Institute for Nature and Forest Research (INBO), found that Acacias in the African Savannah produce substances when they are eaten by giraffes. Those substances evaporate and are picked up by other trees. Those alarmed, surrounding trees create substances that make giraffes less fond of their leaves.

Tree researcher Henk Hillhorst of the University of Wageningen says that genetic properties which are a result of millions of years of adaptation play a role in the specific height of different tree species. This is confirmed by forest researcher Hans Verkerk from the European Forest Institute in Finland. “Some trees shoot up as fast as they can because they compete heavily for light. For example, think of the Scots pine and the birch. Many forests have been created in a short time. The trees are therefore of more or less the same height. The same goes for trees that are alongside lanes.”

It is the interplay of forces between gravity on one hand and the suction effect that trees create when water evaporates from the leaves and needles on the other hand, that regulate the height of the trees.

Hans Verkerk also states that natural forests are more complex because it contains trees that are more resistant to shade, such as beech trees, in the midst of light-loving trees. This already causes different tree heights. The difference in age causes variation as well. “Such forests are more resistant to strong gusts of wind. They can absorb the wind better because the trees support each other.”, continues Verkerk.

In her TED talk, Simard proposed 4 simple solutions to save our forests; we need to …

Want to read the full article in the Belgian press? Visit: https://www.standaard.be/cnt/DMF20220224_97697263?utm_source=standaard&utm_medium=newsletter&utm_campaign=ochtendupdate&utm_content=small_4&utm_term=1-0&adh_i=2792dc818607e28724c027d4fed0e88e&imai=&M_BT=34878501590&articlehash=uk5%2F7CZuNX1zt5%2B%2FuXLDtDbRpWxOm%2BzeLhpMtkfcbfjxFW0m2bfbAk43tFJ3WjzlPNXZi1mbg9d06q1eJHmFDcYvL3eIOljRIvC3Sfw3emkasnMecZWyLBJogwy5g%2BfF84QUFM33ARUsq1JrYDxGXrsHsR%2BscfePPO2WvT7RIghkF89ayTE63Hj2yCH3RuhlV2nDsstYKNp5tfNbxT%2FNnn8tSQ7J5oJbEIuvtNuGAAvoxbM6Wj2vjfXrv2yW8MOVqezfVTlmVkyI7Kb0xHvmgNXp293O1YchWCwByOPTDoLCN2SJHVqgr3aAYxh3tSf0ZbK0zFtoNfivkUjXmpMZfg%3D%3D